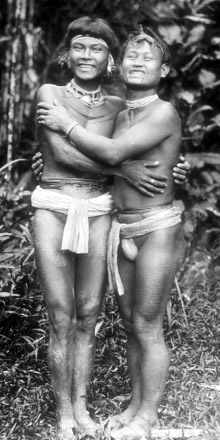 “Journals written during this period talk of ‘flower-adorned’ natives and time being spent ‘with the amiable savages’ (Maass, 1902) on ‘the island of happiness’ (Karny, 1925)”

Mentawai is an archipelago found off the west coast of Sumatra (Indonesia) consisting of approximately 70 islands and islets. The four main islands are North and South Pagai, Sipora, and Siberut; with Siberut – spanning 4,480 square kilometres and with a population of approximately 29,918 [1][1] (Regional Autonomy Website. c.2000.); of which 90% are of indigenous Mentawai origin, the other 10% are considered to consist of Minangkabau, Javanese, and Batak (Bastide, 2008) – being the largest of the four.

The ancestors of the indigenous Mentawai people are believed to have first migrated to the region somewhere between 2000 – 500 BCE (Reeves, 2000), whereas the first colonialists are stated, in early documentation by John Crisp who landed on the islands in 1792, to have arrived in the mid 1700’s in the way of Englishmen whom made an unsuccessful attempt to establish a pepper farming settlement on an island south of South Pagai (Crisp, 1799). For many years prior to this trading was existent between indigenous communities and mainland Sumatran Chinese and Malays (Francis, 1839).

Having established their presence 40 years prior, whilst signing control of Sumatra and the Malay peninsula, the Dutch returned in 1864 to claim the Mentawai islands under the sovereignty of the East Indies (Mess, 1870); a position maintained until the Second World War. Throughout this period the relationship between the Dutch and indigenous communities was reportedly a satisfactory one, as is documented through account of conversation with Mentawai elders whom labelled this time as ‘the good old days’ where they ‘received fair prices in trading and were free to practice their cultural lifestyle, Arat Sabulungan’ [2][2] Arat Sabulungan is a cultural existence by which the indigenous Mentawai people live; held together by a belief system that pays reverence to the spirits of their ancestors, the sky, the land, the ocean, rivers, and everything natural within. Lead by the shaman (Kerei or Sikerei), ritualistic ceremonies are quite common. (Bakker, 1999).

Aside from a military campaign enforcing the eradication of tribal warfare – a change supposedly welcomed by the Islanders – records show that the Dutch did not attempt to meddle with the day-to-day lives of Mentawai people. Journals written during this period talk of ‘flower-adorned’ natives and time being spent ‘with the amiable savages’ (Maass, 1902) on ‘the island of happiness’ (Karny, 1925). 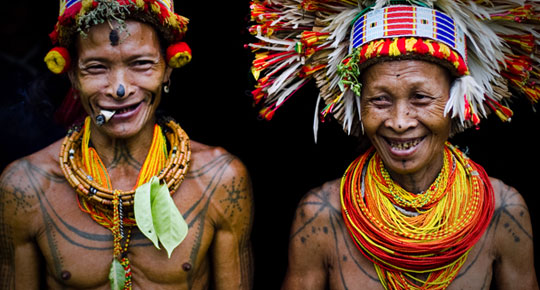 In 1901, August Lett, the first missionary to the Mentawai, arrived on the south coast of North Pagai – establishing a view contrary to that of the Dutch and other early 20th century travellers. Lett, and subsequent missionaries sent to the islands, disapproved and looked down upon the indigenous community for their superstitious beliefs, rituals, and cultural behaviours; describing the people as ‘lazy, underdeveloped and stupid’ and having ‘the distress of a poor people trapped in the terror of evil’ (Hammons, 2010). By 1915, after some difficulties – including the death of August Lett (Persoon, 1987) – missionaries had gained their first convert, extended their efforts to Sipora and Siberut and, by 1932, had gone on to establish a mission station in Maeleppet (Siberut), (Sihombing, 1979).

“As early as 1954, under Indonesia’s goal of national unity and cultural adaptation, the National Government began introducing development and civilization programmes designed to ‘integrate the tribal groups into the social and cultural mainstream of the country’ (Persoon, 2004)”

Of the many changes experienced by the people of Siberut throughout this period and the decades ensuing – notably the establishment of a penal colony in Muara Siberut and the arrival and violent rule of Japanese authority during the period of the Second World War – the most significant, in terms of assimilating the people of Mentawai, arrived in 1950 (after declaration of Indonesia’s Independence in 1945) when Mentawai became part of the Indonesian state (Bakker, 1999).

As early as 1954, under Indonesia’s goal of national unity and cultural adaptation, the National Government began introducing development and civilization programmes designed to ‘integrate the tribal groups into the social and cultural mainstream of the country’ (Persoon, 2004). This, for native Mentawai, meant the eradication of Arat Sabulungan practice; the forced surrender, burning and destruction of possessions used to facilitate cultural or ritual behaviour; and their Sikerei (shamans) being disrobed, beaten, and forced into slave labour and imprisonment.

Under Pancasila [3][3] First articulated on June 1, 1945, Sukarno argued that the future Indonesian state should be based on the Five Principles: Indonesian nationalism; internationalism, or humanism; consent, or democracy; social prosperity; and belief in one God. In the constitution of the Republic of Indonesia promulgated in 1945, the Five Principles were listed in a slightly different order and in different words: the belief in one God, just and civilized humanity, Indonesian unity, democracy under the wise guidance of representative consultations, and social justice for all the peoples of Indonesia. (Britannica, viewed 2012), the five principles for Indonesian state philosophy formulated by the Indonesian nationalist leader Sukarno, the Indonesian Government also began to enforce their new nationwide religious policies; issuing a decree declaring that all Indonesian people must belong to one of the five recognized religions [4][4] Based on the Indonesian notion ‘belief in one God’, there are officially only five religions recognized: Islam, Protestantism, Catholicism, Hinduism, and Buddhism (Tropenbos International 2004: The Position of Indigenous Peoples in the Management of Tropical Forests). . Which, for the Mentawai Islands, resulted in an immediate influx of missionaries and an increase in violence and pressure on the people to adopt change [5][5] In the end many chose Christianity due to its flexible views on the possession and consumption of pigs, which play an integral role in Mentawai history and culture.. 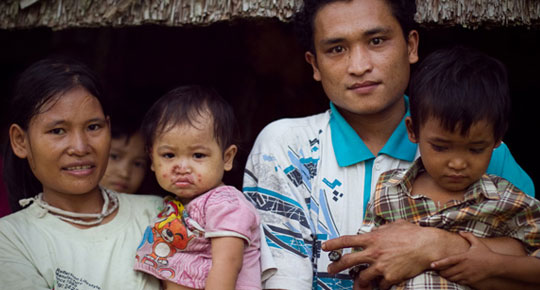 At the core of the programmes implementation strategy was the development of a series of resettlement (PKMT[6][6] An abbreviation for ‘Pembinaan Kesejahteraan Masyarakat Terasing’: Development and welfare of the isolated communities.) villages (1971); whereby houses were constructed according to a uniform design in zoned areas alongside the main rivers/coastline and the people forced to abandon their Uma [7][7] The Uma is the central hub for cultural ceremony, ritual, and storage of all items sacred; it’s a type of ‘longhouse’ built to house an entire clan (eight or more nuclear families) at any one time, which is particularly necessary during times of ceremony. ‘Uma’ is also a term used when referencing an entire clan. and ancestral land to relocate.

After a period of five years these settlements were removed of project status and left in the hands of civil servants and local government authorities to maintain progress and control. This was also the time in which logging companies began to appear throughout the Mentawai Islands. 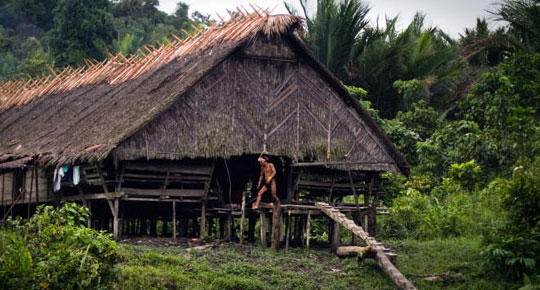 By the late 1980’s, after loggers had devastated the forests of Sipora, North and South Pagai, and – prior to being challenged by a selection of international organizations [8][8] In 1980, WWF (world wildlife fund) published a report entitled ‘Saving Siberut’ which, along with the support of other organizations – primarily UNESCO and Survival International – and other additional international interest, helped persuade the Indonesian government to cancel logging concessions and declare the forests of Siberut a biosphere reserve. – were also in the process of achieving the same on Siberut, the Government’s pressure on resettlement was somewhat relaxed (primarily due to the steady flow of tourism the indigenous community attracted). With this, the people in the Mentawai found that they were once again free to practice their native cultural activities – in areas away from the villages.

However, by this point, and as it remains today, the number of indigenous people still actively practicing the cultural customs, rituals and ceremonies of Arat Sabulungan had already been limited to a very small population of clans primarily located around the Sarereiket and Sakuddei regions in the south of Siberut Island. 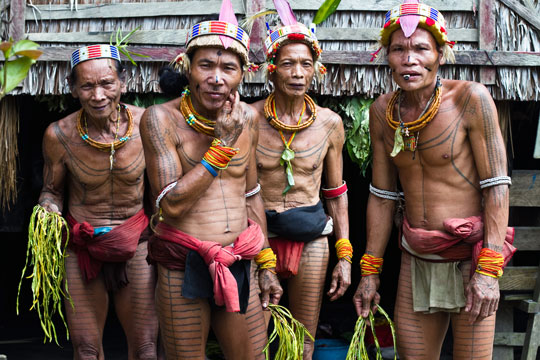