To offer some insight into Mentawai traditional culture and practices, I thought I’d share with you here a few moments captured during a ceremony given for the death of an elder (Panogru).

You see, approximately three or so months after a death, as way of tradition, Sikerei (Shaman), who – among other things – possess an ability to communicate with the spirits of their ancestors, the land (sanitu sibara ka leleo), the sky (… manua), the ocean/rivers (… koat), and all things natural within, will gather the clan together in an Uma (clan longhouse). Where, after ensuring all items of relevant belongings (required to satisfy the eye of the spirits) are present and suitable offerings (plant, animal, and various personal) prepared, the Sikerei – through song, dance, music, and various passages of verbal scripture – will summon the spirits to join them in cleansing the body of the deceased and of course the Uma itself, where its spirit has since been present. 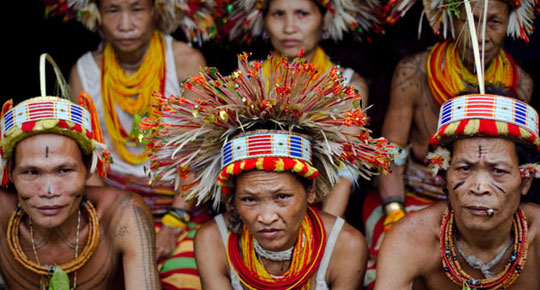 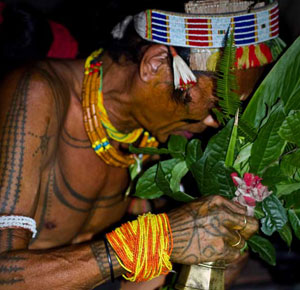 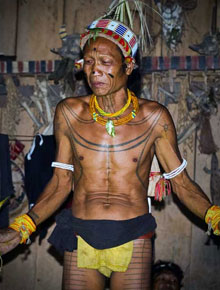 Finally, after three or four days of ceremonial ritual, the spirit is then released from the Uma and, together with the other spirits, able to move on to its place in the forest, sky, etc. An event that also concludes the grieving (termed ‘crying’) period.

Whilst the length of this period does vary, a white cloth material worn around the neck, or, for those closest (widows), above the head (Bukuet), clearly identifies those who are immersed. However I should note that – depending on the sex and age of the deceased – this insignia does have slight variations i.e. a blue cloth signifies the mourning of a child. 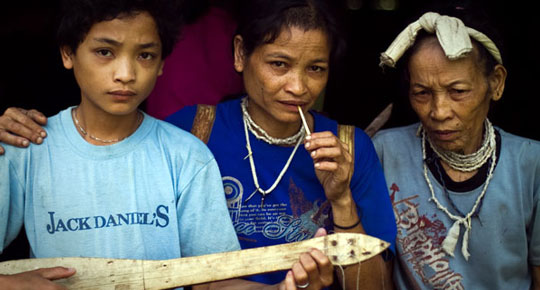 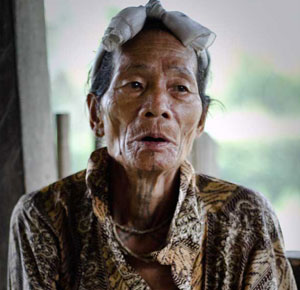 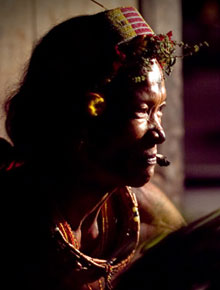 …traditional ceremonies, which can span anywhere from one day (minor healing) to over an entire month (Sikerei inaugurations), it’s not uncommon to see the spirits enter the body of those partaking, evoking a possessed like state (Gobok) – as seen in the clip below.

In brief, the Mentawai ceremonies, which are many (marriage, death, new born, new uma, new canoe, new kerei, illness, successful hunts, broken taboos, and so on), are in place primarily to appease the spirits – the Mentawai deities; ensuring that, as with any given member of the clan, they are to remain happy and at peace at all times, thus avoiding the probability of future illness or, in extreme cases, death.

Whilst obeying cultural taboo is, of course, first and foremost in achieving this – including the requisite of them sharing all food equally, it’s also required that, after a lengthy ritual justifying the need and importance for doing so, pig and/or chicken be sacrificed during ceremony. Which, together with items gifted to a particular (spiritual) space within the Uma (Bakkat katsaila), are among the important offerings gestured to please the spirits.

Quite interestingly, during these traditional ceremonies, which can span anywhere from one day (minor healing) to over an entire month (Sikerei inaugurations), it’s not uncommon to see the spirits enter the body of those partaking; evoking a possessed like state (Gobok) – as seen in the clip below.

In conclusion, though, I’d like to mention that, despite what may be perceived for some as seemingly unconventional practice, this system of cultural belief (Arat Sabulungan), implemented by the forefathers of Mentawai and maintained over thousands of years, fundamentally, seeks to achieve a purpose no different to that of the many other variations established throughout time. Which, quite simply, is to ensure that, by sustaining a peaceful balance between the people and their natural environment, the safety and protection for their health and well-being will always remain… a system which, noted by their current and continued existence as such today, may hold some merit.